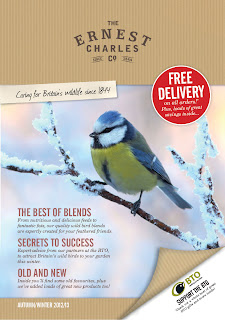 This season’s catalogue is full of old favourites, best sellers including our brilliant merchandise, and a whole host of new goodies, helping you to attract a wide variety of wild birds into your garden this autumn/winter. We work closely with Ernest Charles to provide advice on caring for Britain’s wild birds and, in return, Ernest Charles makes a financial contribution to our work each year!

On Monday evening we got together with a group of volunteers who had very kindly offered to be part of an expanded Garden BirdWatch Ambassador team within Suffolk. The Ambassador network promotes and support the Garden BirdWatch project through talks, stands at events, articles in local publications and media appearances.

A successful RHS Chelsea for GBW

Thanks to the generosity of our friends at Gardman, BTO Garden BirdWatch was able to have a presence at this year's RHS Chelsea Flower Show and to promote the survey and our community of Garden BirdWatchers. 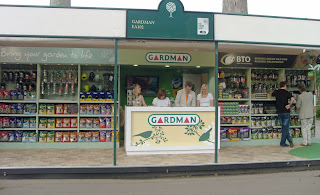 One regular job for the GBW Team is to run validation checks on the records being entered through GBW Online. We do this by using threshold values that flag up any unusual records. One of the flags that we use looks for unusually high counts, with that for Red Fox set to ‘5’ nationally. We follow up cases where the threshold is exceeded with an email or call. When we queried Caroline Rayner’s count she dropped us a reply to say that she has a dog fox and two vixens who make regular visits, often in the company of last year’s cubs. Her highest count was 12 individuals. Caroline has Badgers as well, so the GBW Team were all rather jealous.

Back on 13th January we mentioned the Robin nest-building that was reported by Paul Bayliss. We've just heard that the Robin now has four eggs. Here at the Nunnery we have Long-tailed Tits busy nest-building and lots of birds singing, so things are starting to happen.


With the first returning migrants also reported this weekend (Sand Martins) we can expect things to continue apace, especially if the weather remains this mild. Don't forget that you can record nesting attempts in your own garden through the BTO Nest Box Challenge and you can follow the progress of returning migrants on our migration blog.
Posted by Mike Toms at 08:46 No comments:

Great Spotted Woodpeckers are known for their habit of wedging seeds, nuts and other foods into cracks and crevices, something that makes it easier for them to smash open the seed or nut and get at the reward within. Oliver Rogers sent us the following clip which shows a Great Spotted Woodpecker doing exactly this. What is of particular interest is the behaviour of some of Oliver's other garden visitors. It is clear that some of his regular visitors have watched the woodpecker and learned how to get an easy meal for themselves.


We'd be interested in hearing from other folk who have witnessed anything similar. Special thanks to Oliver for allowing us to link to his video.
Posted by Mike Toms at 06:17 1 comment:

What happened in your garden last weekend?

Each year, over a single week at the end of January, the nation's curtains twitch with eager anticipation as householders become participants in a garden-based wildlife spectacle. The RSPB’s Big Garden Birdwatch, which has just undertaken its annual audit, is a terrific example of how you can capture interest and engage people as ‘Citizen Scientists’, tapping into goodwill, enthusiasm and a love of birds.


As a keen observer of my own garden birds, keeping records through the BTO Garden BirdWatch, I am aware of how the numbers of visiting birds can vary from one week to the next. The six inches of snow that were deposited on my garden in the middle of the weekend, has triggered a big increase in the numbers of Blackbirds and Greenfinches visiting, with my first Bramblings and Siskins of the year as well braving the confines of my small urban plot. Mild conditions over the weekend of Big Garden BirdWatch meant that things were fairly quiet on the feeders, with a few Goldfinches, two Great Tits and the resident Dunnocks, a very different picture. Things will change again as the winter progresses: Siskins should peak in mid-February, though probably in smaller numbers than last year because the crop of conifer seed has been better this year; the Goldfinches will peak in April and the Jackdaws in June. I’m aware of these seasonal patterns because I, and many others, keep a weekly record of the birds visiting my garden.

As the person organising the BTO’s weekly Garden BirdWatch, I am often asked to explain how it dovetails in with Big Garden BirdWatch and what different things the two surveys might reveal. Both surveys have the same central aim: to work with volunteers to collect much-needed information on how and why birds use our gardens. There are some differences, however:

1) Size – The Big Garden Birdwatch is BIG with, for example, 600,000 people participating in 2011, something that provides a detailed snapshot of birds in gardens over a single weekend. BTO Garden BirdWatch is much smaller, with some 15,000 participants recording regularly throughout the whole year, and so does not achieve the same level of detail at a single point in time.

2) Time – Big Garden Birdwatch is one hour, one weekend, once a year. The weekly nature of the BTO Garden BirdWatch tells us more about how the use of gardens changes over time, revealing, for example, how garden use changes in relation to season, weather conditions, food availability and other factors. This is one of the reasons that I know that Siskins make greatest use of gardens in February.

3) Not just birds – Big Garden Birdwatch is about birds. The BTO Garden BirdWatch used to be just about birds too but it now covers birds, mammals, reptiles, amphibians, butterflies, bumblebees and dragonflies (oh, and one moth, two beetles and Hornet). This move to recording a wider range of species came in response to calls from BTO Garden BirdWatchers and a lack of wider understanding about how gardens are used by other species.

4) Cost – Big Garden Birdwatch is free, something that we would – in many ways – love to be able to say about the BTO Garden BirdWatch. Unfortunately, we have to charge an annual subscription of £15 to cover the running costs of the survey and the production of the quarterly magazine Bird Table sent out to participants, which feeds back results and articles.

5) Ownership – Once you have entered your records for Big Garden Birdwatch that’s your job done, until next year. With the BTO Garden BirdWatch, your records are always there for you to view through our online system (it’s a bit like having an online diary). If you spot a Blackcap in your garden and were wondering when else you saw one visit, simply select Blackcap from the list of what you have seen and it will show you all other records. My last Blackcap was in April last year, a passing visit.

I see Big Garden Birdwatch as a springboard, providing budding garden birdwatchers with clear proof that their interest in garden birds can be used to collect valuable information on the wildlife using our gardens. If people enjoy noting down the birds seen in their garden on a single day, then how much more interesting (and addictive) would it become if they could record throughout the year, through a project like the BTO Garden BirdWatch.

I’d recommend doing RSPB’s Big Garden Birdwatch, especially if you have never really considered yourself to be a ‘citizen scientist.’ Once you’ve done that, and found that you enjoy keeping a list of what you have seen, why not go a stage further and give the BTO’s weekly Garden BirdWatch a try. After all, who knows what will happen in your garden next weekend?
Posted by Mike Toms at 01:43 2 comments: